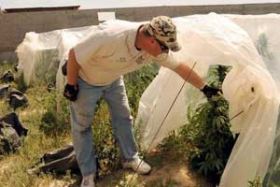 Outside a small rural house tucked behind almond orchards and a dairy farm, Merced County sheriff’s investigators on Thursday uncovered the largest marijuana-growing operation in the county so far this year, with an estimated street value of more than $6 million.“There are thousands and thousands of plants outside and more inside,” Deputy Ray Framstad said.

Deputies found two large gardens, estimated to be at least 3 to 5 acres, hidden behind particle-board fencing outside the home in the 9400 block of Atwater Jordan Road, and hundreds of plants were found inside the home and a storage shed.

“It’s a significant amount of marijuana and probably the largest one we’ve come across this year,” Sgt. Kevin Blake said.

Framstad is the department’s lead marijuana investigator and confirmed Thursday’s grow was the largest found in Merced County in 2014.

Investigators raided the farmhouse around 9 a.m. Thursday. Deputies believe several people ran from the property when authorities arrived to investigate.

Framstad said it was too early to know whether the grow is tied to any specific trafficking organization but said it appeared “consistent with organized crime.”

Deputies seized nearly 3,000 indoor plants, 2,500 plants outside and about 120 pounds of clipped marijuana buds. Deputies also seized a loaded firearm from inside the home. The approximate street value of all the plants and buds is more than $6.1 million, authorities estimated.

At least two makeshift campsites were found in the outdoor garden, with sleeping areas, outdoor stoves, piles of trash and growing equipment, including gardening shears, plastic coverings and tables used to trim buds.

Plants ranged from a few inches in height to several feet tall. Investigators said the growers would start the plants inside in small plastic foam cups and move them in stages from inside the home to outside.

By accepting you will be accessing a service provided by a third-party external to https://rosevillepolice.org/